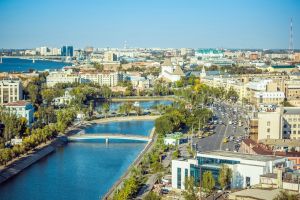 Astrakhan is an ancient town with rich history. The historians say that the town appeared in 1242-1243 when Khan Baty, the grandson of Chingis Khan, placed his camp in the Lower Volga. By the end of ХIII century, a little bit upper the place of modern Astrakhan the town As-Tarkhan appeared, which became one of the biggest towns of the Golden Horde.

In 1459 Astrakhan khanate separated from the Golden Horde, which had weakened by that time.

And finally in 1554, Astrakhan khanate was joined to Russian State which had been ruled by Ivan the Terrible that time.
In Astrakhan have been preserved Oriental flavor, the Kremlin of the XVI century stands in the center of the town. 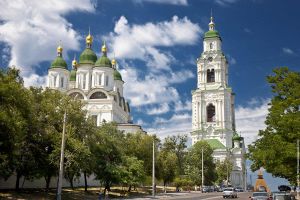 •    Why Astrakhan is sometimes called "the Volga and the "North" Venice"?
Astrakhan is the town placed in the Volga Delta on 11 islands. The network of reservoirs and rivers permeate Astrakhan. More than 50 bridges connect all parts of the town.
•    What is the "Caspian rose"?
On the territory of the Astrakhansky reserve there are Lotus fields, which occupy the largest area on the planet. Lotus is also called the "Caspian rose". The huge flowers bloom almost simultaneously, and flourish from July to September.
National cuisine: fish soup from sturgeon, pancakes with caviar, roast pike-perch.
Who of famous people lived here: Ilya Ulyanov - Russian teacher, Vladimir Lenin father; Boris Kustodiev – the famous Russian Artist.