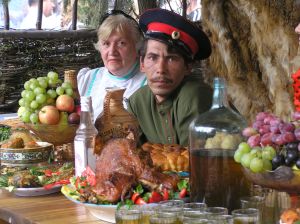 The Rostov Region is a land of glorious history. Rich in an original Cossack culture, a beautiful, unspoiled and very diverse nature and talented, hospitable p

eople. The territory of the rostov Region is equal to Belgium, the Netherlands and Denmark together.

The history of the steppe country, its modern life and places of interest are connected with poetic legends and the originality of the culture of the Don Cossacks, living in their small villages (stanitsa`s).

Its mild and warm climate, boundless steppes, groves and pine forests, mountain crests, numerous rivers, lakes and water storages, as well as the traditional Don hospitality and the delicious Cossack cuisine makes a journey through this area unforgettable/

The Rostov region is really an unique area within the Russian Federation. It is not only famous for it`s well-known historical monuments, museums, reserves, original Cossacks culture and life traditions, but also for its great variety of landscapes and natural reserves.

The Don River flows across the territory of the Rostov region. The Don, with its sandy beaches, is one of the largest rivers in Europe and is connected with the Volga by the Volga-Don Channel. Cruise-ships are sailing the Don river from Rostov to Volgagrad and Moscov and to the Sea of Asov and the Black Sea.

l Sholokhov, who received the Nobel Prize in 1965 for this novel.
Rostov-on-Don - the largest city in the South of Russia, the center of the SFD and "Gates of Caucasus." In appearance of the city remained the old features of the merchants and southern flavor, which is reflected in architecture of city. Rostov, home to a large number of different nationalities. Located near Rostov: Taganrog - birthplace of Chekhov; ancient Greek city Tanais; Starocherkassk and Novocherkassk (past and present capital of the Don Cossacks). In 2018 Rostov-on-Don will host FIFA 2018.